Purchase a Print Copy at a Local Bookstore

Purchase a Print Copy from Amazon

Purchase or borrow a Kindle Copy

"… lively, often hilarious stories from a year or two in the 60's… It is really about people, their foibles and blunders and acts of greatness. The author has such an open-minded, intelligent and humor-filled outlook, that it made me want to read all of his books, no matter what the subject. Greg Palmer sees and writes with intelligence, humor, and heart, and I feel privileged to have him share this slice of his life with us."

– Better World Books
On Father's Day 2009, The Seattle Times' Pacific Northwest Magazine published this excerpt.
"Palmer makes you smell the hamburger grease, fall down laughing at the dialogue, and weep at the death of a cat. A cat! All along, as through a misty scrim at the back of a stage, you can glimpse the sadness to come, the parting of those who will never know anyone in just this way again. There's a lot more here than a batch of funny stories."

Cheese Deluxe chronicles a year in the life of a group of spotty high school seniors who gathered in the mid-1960s at the Samoa Drive-In on Mercer Island, Washington (coincidentally, the same school from which Barack Obama's mother, Stanley Ann Dunham, had graduated five years earlier). Mercer Island is a bedroom community of Seattle, plopped in the middle of Lake Washington and connected to the Big City by what used to be the world's longest floating bridge. In the mid-1960s Mercer Island was known for fancy waterfront homes, an excellent school system, inept sports teams, and teenagers with too much time on their hands and too much money in their pants. For the high school Class of '65, a lot of that time was spent at the Samoa, the Island's premier teen hangout, and a lot of that money was spent on the Samoa's Cheese Deluxe, one of the world's best burgers.

Cheese Deluxe recalls that time and those people, and their mostly true, often comic, occasionally romantic, sometimes automotive adventures in the last blush of being kids on the verge of adulthood. Among the burgered are: Stackhouse, whose single erotic fantasy involves a broken down Dodge, a lonely mountain road, and a bag full of burgers; Frank, the auto shop savant whose only real crime is that the police hate him; Curtis, who has devoted his life to smoking, drinking, driving, and being deeply disappointing to his parents; Clifford, who joins the International Jewish Conspiracy primarily for the cuisine; Janelle, the dream girl of many, who learns something about herself from a dying rabbit; and Tucker, a shy young sax player who, on September 5, 1964, integrates Mercer Island High School all by himself, without any help from lawyers, cops, Federal Marshals, the National Guard, or Nicholas Katzenbach. On the other side of the counter from this group of, if not underachievers, then certainly the achievement-challenged, is the restaurant's staff: Betty, the owner/operator, who knows enough about the Samoa to bring a sack lunch to work; DeeDee, a sophisticated (which is to say cold-as-ice) collegian believed by some of the burger eaters to be majoring in Penmanship at the University of Washington; Arlene, a professional counter personnel who takes no guff, ever, from anybody; Don, the legendary Friday night Master of the Deep Fat; and the author, who was both a member of the Mercer Island Class of 1965 and the Samoa's regular cook, as well as confessor to a group of teens who often wished they had more interesting things to confess. 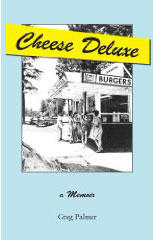 The first edition of Cheese Deluxe was published by Bennett & Hastings Publishing in 2008.