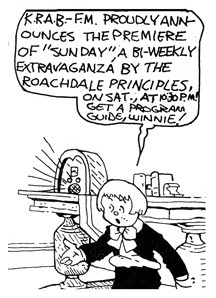 Ad for Sunday by Mike Fields
Greg arrived at KRAB-FM as a writer/producer of the show Sunday, which he characterized as "biting satire, devastating social comment and rollicking rockem-sockem humor in 30 fun-filled minutes of mirth, subject of course, to our listeners' ability to stand for it." It first aired November 16, 1968 (a Saturday). 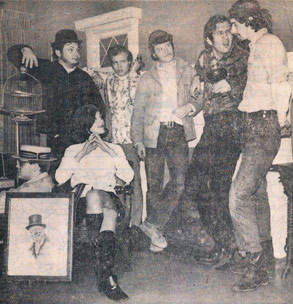 Sunday cast
In an interview two decades later with Jim Frazee of The News Tribune [January 3, 1988], Greg described how he began to write comedy. "I worked at Boeing about ten minutes a day. I was a configuration control analyst, which means I was a clerk for the overhaul manual electronics assembly writing unit. About every three or four hours an engineer would come up to me and say, 'I just did the 65-40178-34 accessory unit assembly auto pilot.' 'Fine,' I'd say, and take out my pen and go 'check.' That was basically the job. I found you couldn't carry all the technical paperwork the FAA requires on a 747 in a 747. You'd have to make two trips. I wrote how to repair the little ashtray." He used those hours at his desk to try his hand at sketch comedy.

Sunday aired, intermittently, for three years, through fall 1971--long after Greg had left Boeing. But it never aired on Sunday. 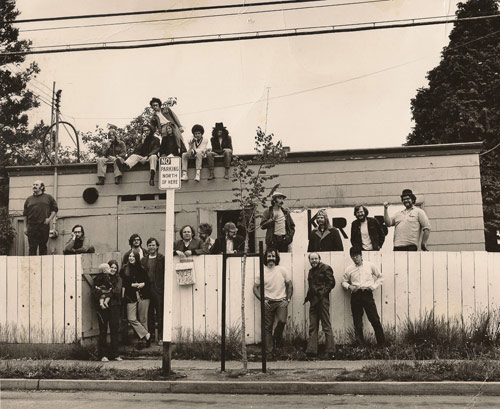 Dick Parker
After getting his feet wet with Sunday, Greg cannonballed into the programming at KRAB. He did readings (the first, "W.C. Fields: His Follies and Cumquats--A remote Reading from Punxatawney"), commentaries (both on-air and written, in the laboriously Xeroxed program guides), interviews, and documentaries, as well as substitute hosting/guesting on musical and conversational programs by friends Jeff "Magic Fingers" Thomson, Dick Parker, and "Dulcet-Toned" Dave Rowland. He progressed, per program guide designations, from "KRAB personality" to "KRAB broadcast manager" at the end of 1969 to "KRAB station manager" for approximately two years, from early 1970 through early 1972. Those years encompassed KRAB's contentious license renewal hearing and resulted, for Greg, in a lasting friendship with KRAB's attorney, Michael Bader, toward whom Greg suspended the disdain he usually directed at those "high-steppin' patent leather shoe boys," a.k.a. lawyers.

Aaron Brown
Greg left the KRAB staff in 1972, but returned to the station in 1975-76 to write, produce, and occasionally host Government Inspected, a monthly documentary series about public institutions--defined as broadly as possible. Kathy Cain, his producer at KTW radio, assisted. Topics included: Harborview, the county public health hospital; the Seattle Police Department; and, most notably, the Washington State Penitentiary at Walla Walla, a program co-written and hosted by Aaron Brown, Greg's colleague formerly at KTW radio and later at KING television (Aaron went on to host at CNN). The program about Walla Walla won a 1976 Ohio State Award for Excellence; the award citation said, "The little known, yet highly significant subject of life inside a large, maximum security prison was skillfully and dramatically exposed through an actuality-based documentary style. Candid, personal statements by inmates, prison officials and law enforcement and court officers were woven into a compelling fabric of understanding. A sharp and often painful picture was drawn through careful editing and skillful narration. Seldom is it possible for the public at large to have the opportunity to hear the unrehearsed expressions of inmates. The result is a personal experience of impact and poignancy."

Government Inspected aired from July 1975 through May 1976. Recordings exist in the Jack Straw Memorial Foundation archive, but are not currently available.

Chuck Reinsch, KRAB volunteer and, more than once, its station manager, has begun building a comprehensive online archive of KRAB's history and its programming, at www.krab.fm. Click here for the Sunday page he has created, with links to audio of nine programs and four scripts.